Three of the main arguments used by people who wish for tighter control on vaping are that they attract teens, lead them onto smoking cigarettes, and that vaping is inherently dangerous. All three lines of attack are now holed below the waterline as the latest report by Public Health England (PHE) finds vaping is still at least 95% safer than smoking and far more effective than NRT gum, spray or patch – and another by Action on Smoking and Health (ASH) finds there is no evidence for a gateway effect or a teen epidemic in Great Britain. 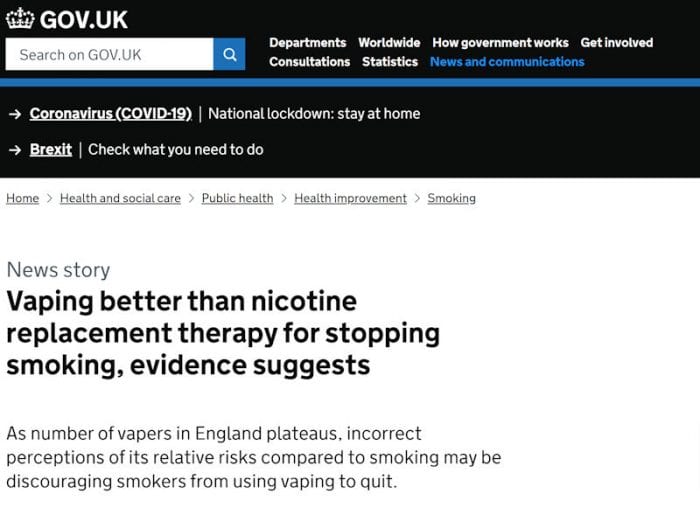 PHE’s Vaping in England is a glorious affirmation that vaping has the potential to eliminate tobacco related disease and death. Not only that, but it underscores just how effective ecigs are as a smoking cessation tool.

It was produced by experts who rely on the facts and evidence surrounding vaping:

This report now provides even more evidence than the previous one in 2018 about vaping’s efficacy, showing it is more effective than NRT or the drug varenicline at promoting smoking cessation and reduction.

The IBVTA commented: “Quit rates involving the use of a vaping product were higher than any other method in every region on England. However, it is concerning that an ASH survey of tobacco control leads found that only 11% of local authority stop smoking services offered vaping products to some or all people making a quit attempt.”

Indeed, on one hand PHE are trying to reassure the public and current smokers that vaping is immensely safer than smoking tobacco and really works as a quit tool, while on the other hand the message is having difficulty getting through to those who need to hear it most.

What does the report tell us?

Key findings from the report show:

What does PHE say?

PHE states that the evidence is clear: as more people use ecigs as part of their quit attempt, the number of smokers successfully ending their cigarette addiction increases. It comments: “Data from systematic reviews since PHE’s 2018 report show that vaping products were significantly more effective for helping people stop smoking than NRT.”

Not only is vaping a vital and effective quit tool, according to the experts, but it also plays a role in official policy: “The government consultation has outlined an ambition to go ‘smokefree in England’ by 2030, with smokers quitting or moving to reduced risk nicotine delivery systems, such as vaping products.”

What about vaping and young people?

Action on Smoking and Health conduct an annual youth survey looking at the use of vape products(4). The information ASH unearths feeds in to the PHE report.

The evidence shows little has changed since 2017, with the current level languishing at 4.8%, but even this small figure overblows the situation as it reflects ever vaping once in an entire month. Only 1.8% of young people vaped more than once a week, and again this figure has not risen. Looking at the figures since 2017, there is absolutely no reason to believe that Great Britain is experiencing a ‘teen epidemic’ as some might say – there is absolutely no evidence to support that claim.

Additionally, because the figure has remained at such a low level, it is almost impossible to believe there is any prospect of it changing in the future which will come as a blow to any tobacco controller seeking to push for increased restrictions on e-liquid flavour, packaging or any other aspect of vaping.

Opponents of vaping argue that vape products are marketed to teens to lure them into vaping so that they can go on to become tobacco users. ASH’s research finds that just 0.7% of teen never-smokers vape, meaning that ecigs are as good as exclusively used by current smokers or as a quit tool by ex-smokers.

With 49.8% of teens saying they only vaped in order to try it, not for the flavours or any other reason, it appears that Britain has managed to find the perfect balance between legislation and the free market that has escaped many other countries.

ASH says that, “misperceptions of the relative harms of smoking and vaping should be addressed,” and PHE highlighted concerns too: “Perceptions of the harm caused by vaping compared with smoking are increasingly out of line with the evidence.”

PHE also warned: “An ASH survey of tobacco control leads found that only 11% of local authority stop smoking services offered vaping products to some or all people making a quit attempt.”

The PHE report’s lead author Professor Ann McNeill said: “Our report draws together findings from randomised controlled trials, stop smoking services and population studies and concludes that nicotine vaping products are an effective way of successfully quitting smoking. What is concerning is that smokers, particularly those from disadvantaged groups, incorrectly and increasingly believe that vaping is as harmful as smoking. This is not true and means fewer smokers try vaping.”

Professor John Newton, Director of Health Improvement at PHE, added: “For anyone who smokes, particularly those who have already tried other methods, we strongly recommend they try vaping and stop smoking – ideally with additional support from their local stop smoking service for the very best chance of quitting for good.”

IBVTA Chief Executive Gillian Golden, commented on the two reports: ‘’Once again, we have an independent evidence review which highlights that vaping is safer then smoking and can help those who smoke to quit. It is now incumbent on smoking cessation and public health stakeholders to get that message to smokers. We welcome the Government’s review of current regulations which could empower even more smokers to quit with vaping.

“With figures suggesting that the sales of cigarettes have risen during lockdown, our members greatly look forward to being able to reopen their stores and providing the service they are experts in – offering smokers a real and proven effective way out of smoking.”

Vapekit welcomes the 250-page PHE report as it shows that what we are doing is helping smokers to quit cigarettes and remain smoke-free which is saving lives. We are proud to operate in a progressive country that has embraced the concept of tobacco harm reduction and hope that other countries can look to us and follow our lead.