The Best Menthol Tobacco E-Liquids of 2021

Menthol cigarettes were banned in the United Kingdom and Europe in 2020, and that has left millions of former menthol cigarette smokers looking for an alternative. If you’re here, it’s probably because you’ve already discovered that the perfect menthol cigarette alternative is vaping! Menthol e-liquids aren’t going anywhere, and if you haven’t switched to vaping yet, the fact that you can still get the menthol rush you love through vaping should provide a strong incentive to finally kick your cigarette habit for good. 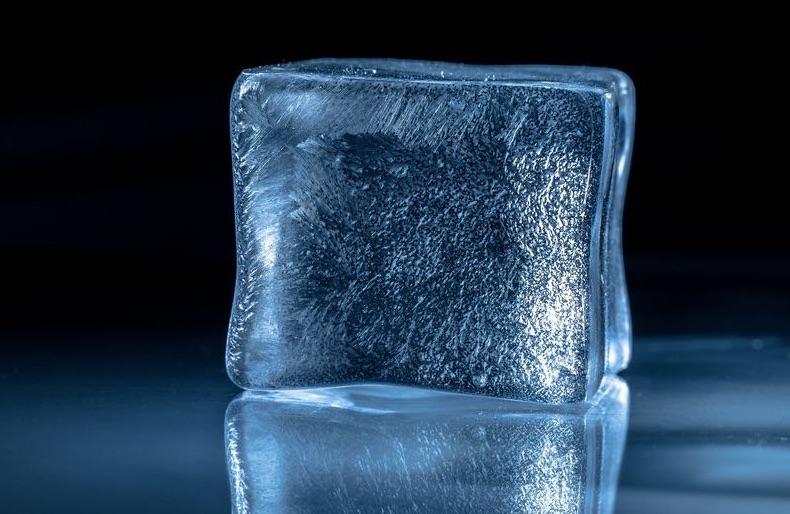 For a former menthol cigarette smoker, there really is nothing quite like a menthol tobacco e-liquid. Menthol is one of the most common flavourings in the e-liquid world. It can add an icy edge to sweet flavour profiles, and it’s also great on its own. Some people absolutely love e-liquids featuring the flavour of menthol and nothing else.

If you’ve recently switched from smoking to vaping, though – or you’re just about to make the switch – you’re probably going to want an e-liquid that mimics the flavour of a menthol cigarette as closely as possible. E-liquid makers know that’s what former menthol smokers want, and there is an absolutely enormous selection of menthol tobacco e-liquids on the market today for that reason.

Are you having trouble deciding which vape juice to try first? We’re here to help. These are the best menthol tobacco e-liquids of 2020. 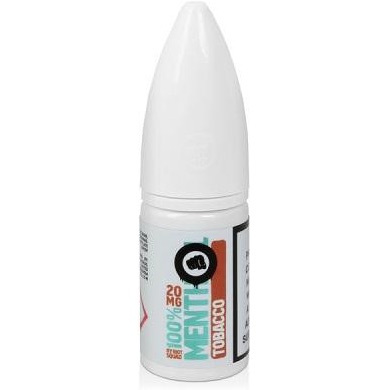 Riot Squad’s Tobacco Menthol e-liquid isn’t just notable for its flavour. It’s also unique in the fact that Riot Squad is one of the only companies using hybrid nicotine in its e-liquid. Are you having difficulty deciding whether freebase nicotine or nicotine salt is the right choice for you? This vape juice uses a 50-50 blend of both nicotine types, so you’ll get the higher bioavailability of freebase nicotine as well as the smoothness of nicotine salt. This e-liquid provides a balanced flavour with an assertive tobacco base and just the right amount of coolness. 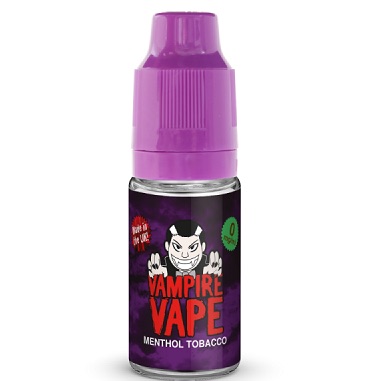 If you thought that the previous e-liquid on this list had an assertive tobacco flavour, this one is really going to knock your socks off. The people at Vampire Vape have never been shy about developing vape juices with very bold flavour profiles, and their Menthol Tobacco e-liquid is no exception. Like the previous e-liquid on this list, Menthol Tobacco by Vampire Vape is light on the menthol. In this vape juice, the menthol isn’t really there as a flavouring element so much as it is there to take just a bit of the edge off and soothe the throat. While the previous e-liquid has a base flavour capturing the taste of a bold but still refined machine-made cigarette, this one goes all-out in replicating the unrestrained flavour of hand-rolled tobacco. If you want a menthol tobacco e-liquid that’s bold and uncompromising, this is the one. 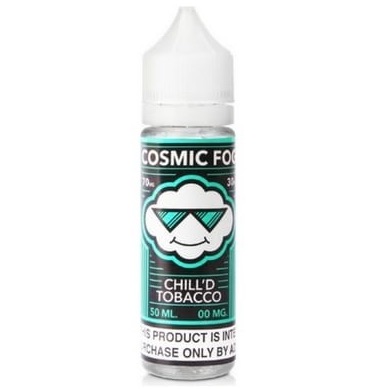 No flavours go together quite as well as tobacco and chocolate. The tobacco gives the chocolate a slightly savoury note, while the chocolate gives the tobacco some much-needed richness and sweetness. It’s a match made in heaven, and Chilled Tobacco by Cosmic Fog combines those two notes with hints of mint and menthol. The overall effect is a bit like enjoying an after-dinner mint while having a cigarette, and we think that former smokers are going to find it absolutely delicious. 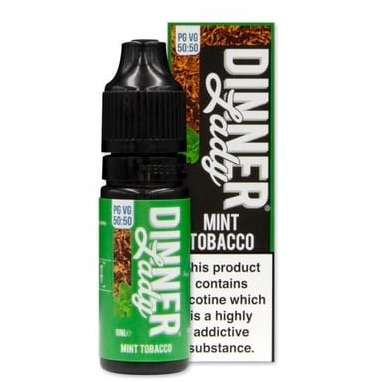 If you’re at all familiar with the e-liquid scene, you might know that Dinner Lady is one of the most popular vape juice brands here in the U.K. You might also know that Dinner Lady’s popularity is largely based on the company’s exquisite interpretations of a variety of delicious dessert flavours. Why, then, have the mixologists at Dinner Lady turned their attention to tobacco e-liquids? Maybe it’s because vapers across the U.K. have really gone back to basics lately and have shown a greater appreciation for flavour profiles that aren’t quite so sweet. Whatever the reason, Mint Tobacco by Dinner Lady is a real hit. The slight hint of sweetness from the mint perfectly offsets the assertive tobacco base. 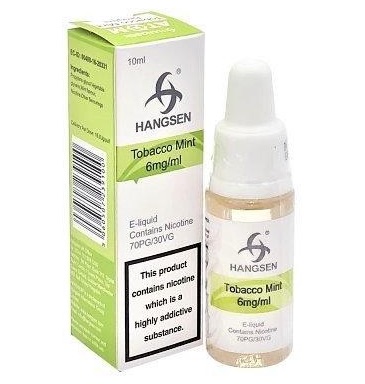 Menthol might be an extract from the peppermint plant, but it doesn’t taste particularly minty on its own. If you want to create an e-liquid that offers some of the sweetness and smoothness of mint, you’re not going to get those things by using only menthol – you’ve got to add some mint flavouring as well. That’s what the mixologists at Hangsen have done with their Tobacco Mint e-liquid. Blending a smooth mint flavour with a mild tobacco base and a cool mint finish, this is a tobacco menthol e-liquid that truly offers a complete experience. 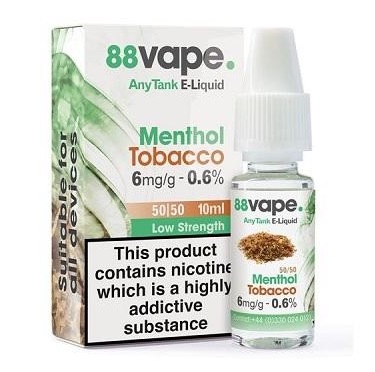 Made right here in the U.K., 88Vape’s e-liquids offer a premium vaping experience at an ultra-low price point that’ll help you vape without breaking the bank. Menthol Tobacco by 88Vape offers the quintessential menthol cigarette flavour that you’ve been missing ever since the ban kicked in. The menthol isn’t too chilly, and the tobacco note is perfectly smooth and satisfying. This e-liquid will be a hit with anyone who tries it. 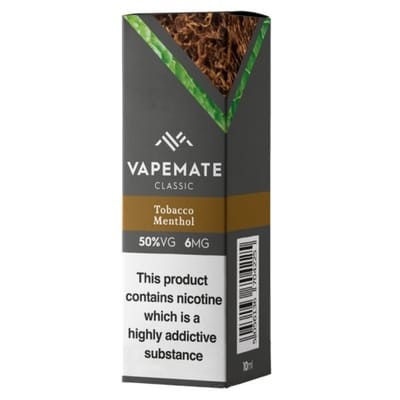 This is the first menthol tobacco e-liquid on our list that really favours the menthol side of the equation a bit more and gives you a nice, chilly inhale coupled with a smooth and mellow tobacco base. If you preferred the colder menthol cigarettes during your time as a smoker – maybe you liked the cigarettes with crush balls in the filters, for instance – you’re going to enjoy the double dose of menthol in this vape juice. 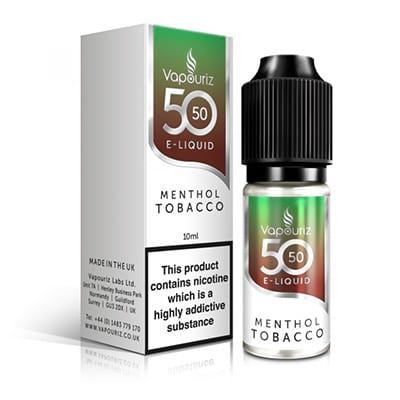 Menthol Tobacco by Vapouriz is an e-liquid that really tries to capture the authentic experience of smoking a menthol cigarette. It doesn’t have the exaggerated coldness that plagues some other menthol e-liquids. In this e-liquid, the menthol simply serves to take the edge off of the very bold tobacco base flavour. If your favourite menthol cigarettes were always the ones that had very full tobacco flavours and were light on the menthol, this one would be an excellent choice for you.

In creating their Menthol Tobacco e-liquid, we think it’s safe to say that the people at Club Juice focused on trying to achieve an absolutely perfect balance. Without tipping the scales too far in favour of the tobacco or the menthol, the idea here is to create a vape juice that’s truly reminiscent of a menthol cigarette. We think they’ve done an excellent job.

If you’re a nicotine salt aficionado, you know there’s no way we could leave you out when compiling a list of the best menthol tobacco e-liquids. It’s most common for nicotine salt users to own very small vaping devices such as pod-based systems, and when you use that type of device, you need an e-liquid that delivers slightly more intense flavours to make up for your hardware’s lower vapour production. That’s especially true of menthol, which can sometimes be difficult to taste if it’s used in a lower-vapour device. Iced Tobacco Nic Salt by Ohm Brew Menthol Blast delivers that extra burst of menthol to give you an experience that’s perfectly balanced for pod systems.

You’ve probably noticed that, up to now, all of the e-liquids on this list have used descriptive terms like “menthol tobacco” rather than “menthol cigarette.” That’s because you can create a fairly convincing rendition of the flavour of tobacco in vapour form, but replacing the flavour of cigarette smoke is quite a bit more challenging. Cool Cig by V4 V4por attempts to deliver that experience, though, with a slightly smoky note that really makes this e-liquid stand out.

When you see the “50/50” in the brand name, it’s pretty obvious what Menthol Tobacco by Double Drip 50/50 is attempting to accomplish. With a 50/50 blend of grassy Virginia tobacco and chilly menthol, this is an e-liquid that has some wonderfully savoury and nutty notes to go with its cool minty edge.

Although we’ve used this article to highlight the best menthol tobacco e-liquids on the market, it’s important to remember that there are also many menthol e-liquids that don’t include tobacco flavours at all. When you were a smoker, was it the flavour of the tobacco that kept you coming back to menthol cigarettes, or was it really the nicotine along with the cool rush of the menthol?

Once people realise that they can disassociate the nicotine and the menthol from the thing they never actually liked very much – tobacco smoke – they sometimes lose interest in menthol tobacco e-liquids and start buying plain menthol e-liquids instead.