Do e-Cigs Present A Passive Vaping Risk To Bystanders?

A lot of money is being spent on attacking vaping, mainly coming from just two sources. One of the techniques they use is to tell journalists 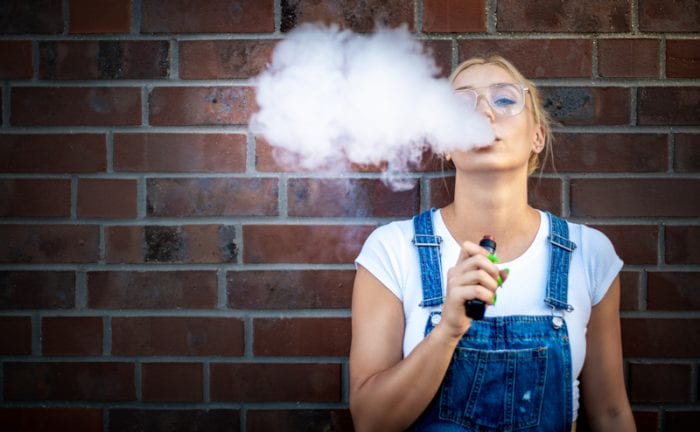 What is second-hand vape?

Second-hand vape is the vapour someone using an e-cigarettes breathes out, the cloud that you see. Depending on the style of vaping being carried out, the vapour can be visible in the air or room for a while. A non-vaper breathing in will take some of this vapour into their lungs.

Absolutely not. When tobacco products burn they release thousands of toxic chemical compounds, heavy metals, solid particulates, tar and a huge amount of nicotine relative to vapour. Vapour is an aerosol that is mainly water.

What do anti-ecig campaigners say about second-hand vape?

A recent example is provided by Spanish public health academic Beladenta Amalia (1). She makes the claim there’s a danger to passive vaping. She repeats the objection that vapour contains “fine and ultra-fine particles, nicotine, formaldehyde and acetaldehyde, as well as metals.” She also claims that vaping causes cardiovascular disease.

The studies she uses to support her claims are all based on suspect methodology, and one study has been retracted (cancelled) as it claimed vaping caused heart attacks up to ten years before people began vaping!

What does the unbiased evidence say about second-hand vape?

One typical research paper only identified a potential risk in a “hotboxing” scenario in a car with two vapers vaping, and even then the nicotine isn’t posing a risk, it’s just if a third party had a PG or VG intolerance (2). Hotboxing is when the car fills with vapour while the windows and doors are closed.

What do British authorities say about the danger of second-hand vape?

Public Health England says second-hand vape danger is a “myth” (3). It states: “There have been no identified health risks of passive vaping to the health of bystanders. People with asthma and other respiratory conditions can be sensitive to a range of environmental irritants, as well as pollen and cold air.”

The NHS notes (4) that while smoking poses a risk to bystanders, “Smoking e-cigarettes, also known as vaping, doesn’t produce tobacco smoke so the risks of passive smoking with conventional cigarettes don’t apply to e-cigs.

“E-cigs release negligible amounts of nicotine into the atmosphere…the Government has no plans to ban vaping indoors.”

Should I be worried about vaping near my pets, children, or pregnant women?

The experts say that although there is no such thing as second-hand vape based on current independent evidence, they still recommend avoiding using your e-cigarette near children, or pregnant women. Of course, e-liquids should always be stored in a safe container to keep them safe from pets and children.