The number of pubs allowing vaping inside has been steadily dropping, now activists are pushing for a ban on smoking and vaping in beer gardens following the partial lifting of lockdown restrictions. The calls mirror those made during the summer of 2020 when pubs and cafes were encouraged to sit people outside. Will we still be able to vape while having a drink or bar meal? 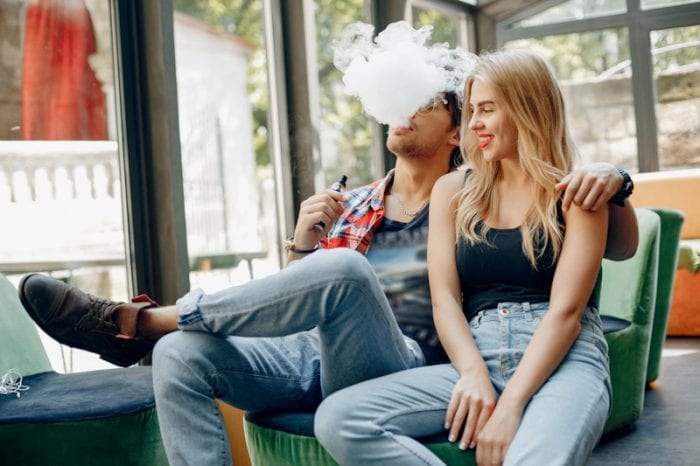 May 2020, Mark Pritchard MP wrote to Health Secretary Matt Hancock to demand that vaping and smoking be banned from outdoor seating areas and beer gardens. Later, in June, during a debate in Parliament, he added that there was “nothing worse” than having his lungs filled with other people’s “smoke”.

The government refused to pass legislation prohibiting smoking or vaping from outdoor areas, preferring to leave it up to local authorities. Manchester was one which imposed terms and conditions on pavement licences (1). Despite it being limited to “Smoking of tobacco is not permitted”, many reports came in from vapers that they were being targeted too because it looked like someone was smoking.

The same thing happened in Newcastle and North Tyneside despite their ordinances only applying to smoking too (2) (3). Action on Smoking and Health (ASH) supported these measures (4), citing the World Health Organisation: “the need to take measures to prevent the initiation, to promote and support cessation, and to decrease the consumption of tobacco products in any form.”

The obvious point here is that neither electronic cigarettes nor e-liquid contains tobacco, but the problem is that the World Health Organisation defines vape equipment and associated material as tobacco products – which lends support to those who voluntarily extend bans from smoking to include vaping.

ASH has now repeated its call for outdoor sites including pavements and beer gardens to be made smoke-free now that the lockdown restrictions have been partially lifted. Unfortunately, again, the organisation has failed to deliver a clear message differentiating vaping from smoking, an example of which is the recent interview ASH’s Deborah Arnott gave to BBC Radio Berkshire (5), which means that landlords still have no clear guidance.

Without clarity, the last place pub owners can get information from is the like of The British Beer and Pub Association (BBPA), the “leading body representing brewers and pub companies across the UK” (6). The BBPA has been asked to send a strong message to publicans about the benefits of supporting vaping on their premises but has preferred to “leave it up to the individual” to decide what happens on their premises.

Research is clear that vaping does not pose a second-hand risk to others, Public Health England write: “there have been no identified health risks of passive vaping to the health of bystanders.”

Consequently, some pubs may decide to prohibit vaping from beer gardens over the next few months and the best advice is to vape with consideration for those around you. Try to mouth-to-lung or stealthvape, emitting reduced amounts of vapour or maybe move to a less populated part of the beer garden where people aren’t eating.