There have been a number of studies showing vaping works as a smoking quit tool for people who have chosen to switch to vaping. Now, Co-Chief Investigators Professor Caitlin Notley and Dr Ian Pope are looking to see if offering starter kits to people not considering stopping smoking works. Announced last year, the actual trial is now being rolled out in selected NHS emergency departments. 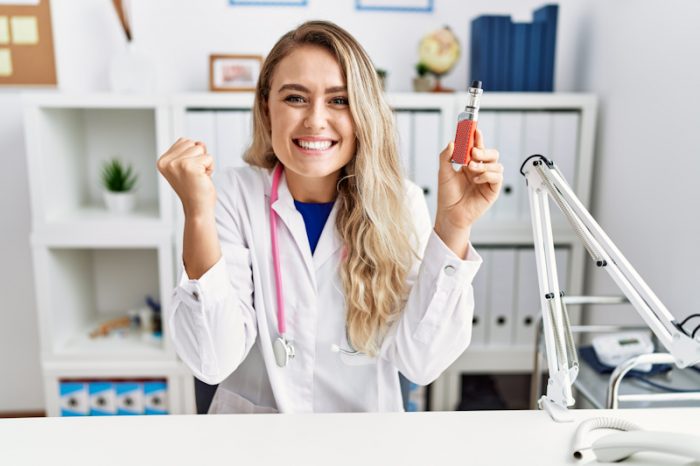 The ground-breaking Cessation of Smoking Trial in the Emergency Department (COSTED) is being led by University of East Anglia’s Caitlin Notley and Dr Ian Pope, who works as an emergency doctor at the North Norwich University Hospital.

The trial itself is funded by the National Institute for Health Research and will take place at North Norwich, London, Homerton, Leicester, Edinburgh, and Cambridge.

Why Should People Get Free Starter Kits?

People who decide to quit buy their own kits, but the trial is aimed at reducing the huge cost to the NHS of people who are not currently trying to stop smoking – a bill that runs to £2.6 billion a year.

Who is being targeted?

While around 15% of the population smoke, smokers form a disproportionate number of those attending emergency departments, making up a quarter of patients.

Many of these smokers want to quit, have failed in the past, and many of them distrust electronic cigarettes because of something they read in a newspaper.

Why the emergency departments and not a Stop Smoking Service?

The trial coordinators say that the number of smokers arriving in emergency offers up a great “teachable moment, where smokers are able to consider their own health behaviour”. Also, Notley and Pope say, having to sit and wait in the department for a couple of hours gives patients a great opportunity to sit and reflect on their lifestyle choices.

“There is very good evidence for e-cigarettes as a way of supporting people to successfully quit smoking,” says Caitlin Notley. “A recent trial found that e-cigarettes were more effective at supporting smokers to quit than nicotine replacement therapy – and e-cigarettes are now the most frequently chosen method of support for people choosing to quit smoking themselves.”

Will this save the NHS money?

The trial will not only see if the starter kits help smokers who weren’t planning on quitting to stop smoking, but it will also look to see if it is possible to roll this trial out across the entire NHS and if it would be cost effective.

The coordinators say: “The intervention has the potential to reduce smoking prevalence by at least 6% based on existing evidence, impacting on improved long term health outcomes for approximately 334,000 members of the UK population if adopted across the NHS.”

Professor Caitlin Notley and Dr Ian Pope will be presenting the findings from the trial at conferences and in a peer-reviewed paper after it has been completed.