I quit smoking and I can’t breathe

There’s nothing more frustrating than trying to improve your health and then discovering that you feel worse. If you are quitting smoking after years of being a slave to the cigs, you will be looking forward to breathing freely again. But what if you find that you are struggling for breath, and that you are coughing more than ever? 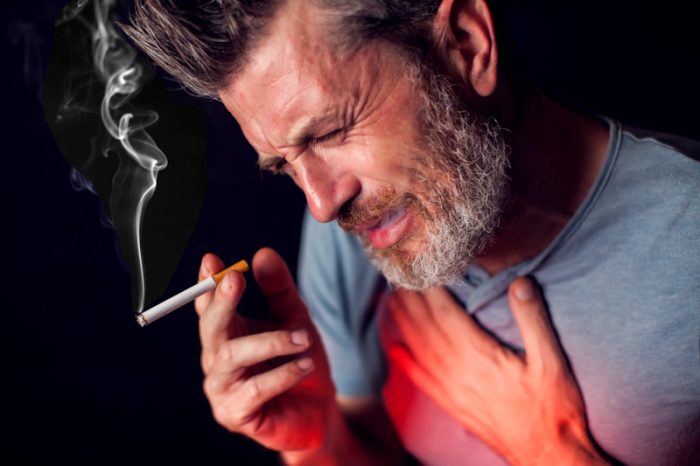 What is going on in your lungs when you smoke?

Your lungs are lined with tiny nodules called cilia. These are coated in a thin layer of mucus. The cilia move around when you breathe and act as a filtration system by capturing fine particles and moving them away from your lung tissue. Those particles may contain germs and viruses and so your cilia play an important role in warding off illness. The cilia move all the nasties back up your trachea. You then swallow them and condemn them to a painful death courtesy of the hydrochloric acid in your stomach.
Sadly, smoking causes untold damage to cilia. Little wonder that smokers have been seriously impacted by Covid-19.
Smokers often experience breathing issues as their cilia are compromised. To make matters worse, cigarette smoke also causes the lungs to produce excessive mucus. This can clog airways and tends to be abnormally thick. It is the claggy mucus that causes smokers to suffer from wheezing and coughs. These are the body’s back-up mechanisms for clearing airways and ejecting excess mucus.
The bronchi of the lungs are also impacted by smoking. These are the tubular branches that spread air from the trachea into the lungs. They are connected to the bronchioles which are smaller branches that lead to tiny air sacs called alveoli. Smoking can lead to inflammation, hypertrophy, and fibrosis in the bronchi and bronchioles. It can also completely destroy alveoli. The resulting condition is called emphysema. Sufferers have reduced capacity to exchange oxygen and carbon monoxide.

What happens to your lungs when you quit?

It’s scary how much damage smoking can cause to your lungs. However, as long as you haven’t developed COPD (Chronic Pulmonary Obstructive Disease) or emphysema, your lungs will begin to recover as soon as you quit smoking.
Cilia begin to regrow surprisingly quickly after your stop smoking. They eventually begin to function normally. With your lungs not being subjected to huge levels of toxins, inflammation is reduced, and mucus production starts to return to normal levels. After a period of time, usually around four weeks, you will notice that your wheezing and coughing have eased. Your body is repairing itself. Something it was unable to do while you constantly subjected it to cigarette smoke.
Why do things get worse before they get better?
Your body will begin to recover shortly after you have smoked your last ciggie. But in the first couple of weeks, you might find that you are coughing more than ever, and you could be struggling to breathe. Believe or not, this is a good sign!
Because you have stopped smoking, normal service is being restored in your lungs and you become able to expel the nasty mucus there because your cilia have started doing their jobs. Your body is realising that it can rid itself of the mucus and goes into overdrive to eradicate it. This is why you are coughing a lot.
In addition, you should know that cigarettes feature bronchodilators. These open your airways when you inhale, helping you to breathe. It’s just another sneaky trick that tobacco companies use to keep you smoking. When you quit smoking, you are not inhaling bronchodilators anymore, but the lung damage and mucus is still there. This means that your breathing may initially feel more comprised than it did when you were smoking.

What are the other factors that affect your breathing when you quit?

You should bear in mind that the stress you are feeling when you quit can also impact your breathing. The sudden removal of your smoking crutch could result in severe stress and even panic attacks. These will certainly cause you to feel tight chested and short of breath.

Should you seek medical help?

It is also important to remember that the breathing difficulties you experience may be coincidental and that you have contracted another illness. You will be particularly vulnerable to respiratory illnesses because of your smoking habit. If your symptoms persist, it is best to seek advice from your GP. They can refer you for tests if the cause of your issue is in doubt.

Stay off the cigarettes!

Don’t let any wheezing and coughing derail your attempt to stop smoking. It won’t be long before you feel much better. Just remind yourself that your symptoms are most likely signs that your lungs are repairing themselves. They simply need to get rid of the nasties that cigarettes have left behind. Lungs cannot fully repair themselves until that debris has been expelled.