The best eliquid flavour names – ever!

Who would have thought that life could change so dramatically in a matter of a few days?

As the new year dawned, the idea of a 21st century plague sweeping across the nation and shutting everything down hadn’t occurred to me. After all, why would it?

Then Covid-19 took over the known universe. It felt as if life had been cancelled.  There was no news that wasn’t coronavirus news and it wasn’t long before I was barrel scraping when looking for reasons to be cheerful. 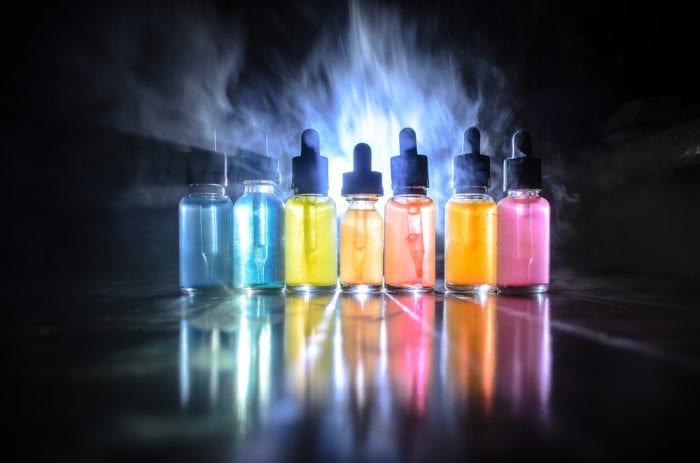 It has to be said that there were aspects of an otherwise desperately depressing situation which provided moments of levity. For instance, who could have predicted the items that people consider it crucial to stockpile?

I focussed my attention on ensuring that I had enough food to eat and eliquids to vape. The rest of the nation appeared to have inexplicably prioritised toilet rolls.

In the midst of the toilet roll famine (which didn’t affect me because I had no less than 24 rolls in the cupboard), I did find something that made me smile – amusing eliquid names.

Let’s face it, revelling in a good play on words is infinitely preferable to, say, staring at the wall or listening to the latest Covid-19 daily update while on coronavirus house arrest.

I know that it’s the flavour that counts with eliquids but I am a word nerd whose favourite ice cream would be Chunky Monkey whether it tasted of bananas or beetroot. There’s certainly nothing vanilla about my eliquid moniker top ten!

You have to admire whoever came up with this fabulous mash-up of Red Adair and Fred Astaire. If you aren’t familiar with Red Adair, he was an American oil well firefighter. I’m guessing that the interesting name contributed to the popularity of this T-Juice flavour, but I am sure that it would have been a big hitter, even if it had been christened Berry, Grape, Aniseed, Eucalyptus and Menthol!

I just love this flavour name! For me, it conjures thoughts of a magical scene from a fairytale complete with giant iridescent crystals sparkling through the swirling mist. But that’s just me! The name doesn’t exactly shout berries, cherries and menthol, but Crystal Mist is a winning name for a delicious flavour that you will find in the Double Drip range.

The finest eliquid names rarely hint at the nature of the flavour. After all, you’d have to be a brilliant wordsmith to conjure such imaginative names and weave in a reference to the taste. But Wonder Worm does tell you most of what you need to know. This special treat from Charlie’s Chalk Dust is, indeed, a worm flavour! If you are cringing at the thought of those little wrigglers being squeezed into a juice bottle, bear in mind that the worms here are of the gummy variety.

How ironic that we have been presented with one of the best eliquid names by the Boring Vape Co. Jabuticaba is a grape flavour with an earthy taste that boasts hints of spice on the finish.  Don’t try to pronounce this one when you have had a few! It doesn’t exactly trip off the tongue!

I can’t decide if Heisenberg is a brilliant flavour name or whether it’s the enormous popularity of the juice that ensures it stands out from the crowd. Either way, this eliquid deserves to be celebrated. This fruit, aniseed and menthol blend from Vampire Vape boasts a secret recipe and is top of the vaping pops. The name honours the alter ego of Walter White, a Chemist turned cooker of meth in the hit TV series Breaking Bad.

I suppose Bat Juice was a rather obvious name for a flavour by Vampire Vape, but I love it anyway. Its suitably enigmatic and so keeps you guessing about what you are about to experience.  I can tell you that you can expect a balanced blend of berries and aniseed. Bat Juice would definitely be a firm favourite with the caped crusader and the name makes for a cool juice bottle to flourish when its time to top up.

Grapple and Slapcurrant sounds like a Spoonerism and it could be a challenge to enunciate after a few pints! This popular Riot Squad flavour is well worth trying if you enjoy fruity juice and are looking for a tasty all day vape. You won’t be surprised to hear that it’s a blend of apple and blackcurrant and it methinks it is a rather good one.

The team at Charlie’s Chalk Dust have hit the spot once again with Head Bangin Boogie. It’s a blueberry popsicle flavour that tastes as upbeat as its supremely cool name and is enough to get your taste buds tapping their toes, if they had any.

OK, I admit that this T-Juice classic isn’t currently on the VapeKit menu but watch this space. Bohemian Custardy is absolutely my favourite flavour name ever and so I couldn’t bring myself to omit it from my roll of honour. It’s a dessert delight of distinction and while it isn’t particularly bohemian, it is extremely custardy and boasts just enough razzle dazzle to honour a classic tune.