X
This site uses cookies to provide and improve your shopping experience. If you want to benefit from this improved service, please opt-in.
More Info
Accept Cookies
BlogQuitting SmokingVaping Equivalency – How Much Nicotine is in one Cigarette?
Menu
Quitting Smoking

Vaping Equivalency – How Much Nicotine is in one Cigarette? 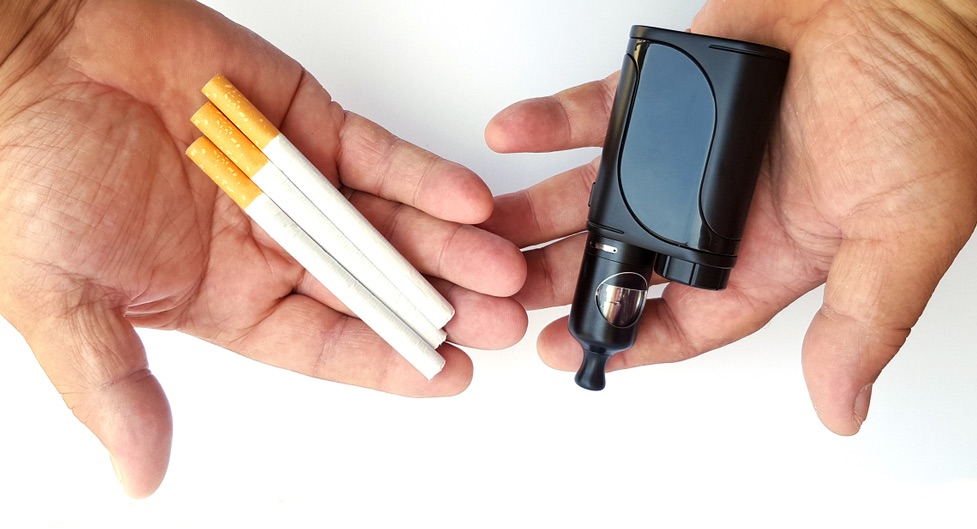 One of the first things you’re likely to want to know when you switch to vaping is how much you should vape. That’s partially because tobacco cigarettes have a major difference from e-cigarettes in that they’re naturally self-limiting. A smoking session consists of one cigarette; when the cigarette burns down, you know you’re done. That’s not the case with vaping because your vaping device doesn’t have a mechanism for telling you that you’ve gotten enough nicotine. Instead, you have to decide for yourself when you’ve had enough.

So, how much nicotine is in one cigarette? How much vaping is equal to one cigarette?  As you’re about to learn, that’s a question without a definitive answer. There’s no easy way to tell whether you’ve vaped enough, so you’ll have to judge for yourself. The good news, however, is that most nicotine users naturally regulate their intake to appropriate levels. Here are a few pointers that can shed some light on the topic of how cigarettes and e-cigarettes compare in their nicotine content.

How Much Nicotine Is in one Cigarette?

It’s also important to note that all people do not smoke cigarettes in the same way. For example, many low-yield cigarettes have perforated papers that are intended to decrease the amount of nicotine inhaled. When those cigarettes are analysed for their nicotine content, the analysts use puff machines that leave the perforations uncovered. Many people, however, cover the perforations with their fingers when smoking light cigarettes.

With those things in mind, we’ll use the figure of 1.1-1.8 mg of inhaled nicotine per cigarette as a starting point. Based on that figure, you’ll inhale around 22-36 mg of nicotine when smoking a pack of cigarettes, not accounting for the bioavailability of the nicotine.

How Much Nicotine Is in a Bottle of E-Liquid?

In 1985, the journal Regulatory Toxicology and Pharmacology conducted a study that attempted to determine the bioavailability of nicotine in cigarettes by checking the blood-nicotine levels of 865 smokers. The researchers conducting the study found that the smokers absorbed an average of 0.75-1.25 mg of nicotine per cigarette into their bloodstreams.

Interestingly, the researchers also found that the estimated nicotine yield of a cigarette according to Federal Trade Commission analytics doesn’t have a great deal to do with the actual amount of nicotine absorbed by the smoker into his or her bloodstream. Rather, the smoker’s behaviour is what seems to determine nicotine absorption; people automatically adjust their behaviour to achieve the desired level of satisfaction. Keep that fact in mind when you try to determine whether your switch to vaping is causing overconsumption of nicotine.

Listen to Your Body and Adjust Your Nicotine Consumption as Needed

As you’ve learned from reading this article, the fact that a cigarette has been analysed and found to contain a certain amount of nicotine doesn’t mean you’ll absorb that amount of nicotine into your bloodstream when you smoke the cigarette. No medication, drug or active ingredient is 100-percent bioavailable, and some of the nicotine that you consume will ultimately be wasted and will not reach your bloodstream.

Exactly how e-liquid compares to tobacco cigarettes from a bioavailability standpoint is not known. However, you should assume when calculating how much nicotine you use per day that your body will not absorb all of the nicotine that you use when vaping.

Ultimately, though, you can determine whether you’re using the correct amount of nicotine simply by listening to your body. If you aren’t feeling satisfied and are craving a cigarette, you probably aren’t vaping enough. If you feel jittery or simply think that you might be getting too much nicotine, you might want to slow your vaping down a bit. As long as you listen to what your body is telling you, you’re probably doing things correctly.