X
This site uses cookies to provide and improve your shopping experience. If you want to benefit from this improved service, please opt-in.
More Info
Accept Cookies
BlogHealthCoughing when Vaping? Here’s What to Do About It
Menu
Health

Coughing when Vaping? Here’s What to Do About It 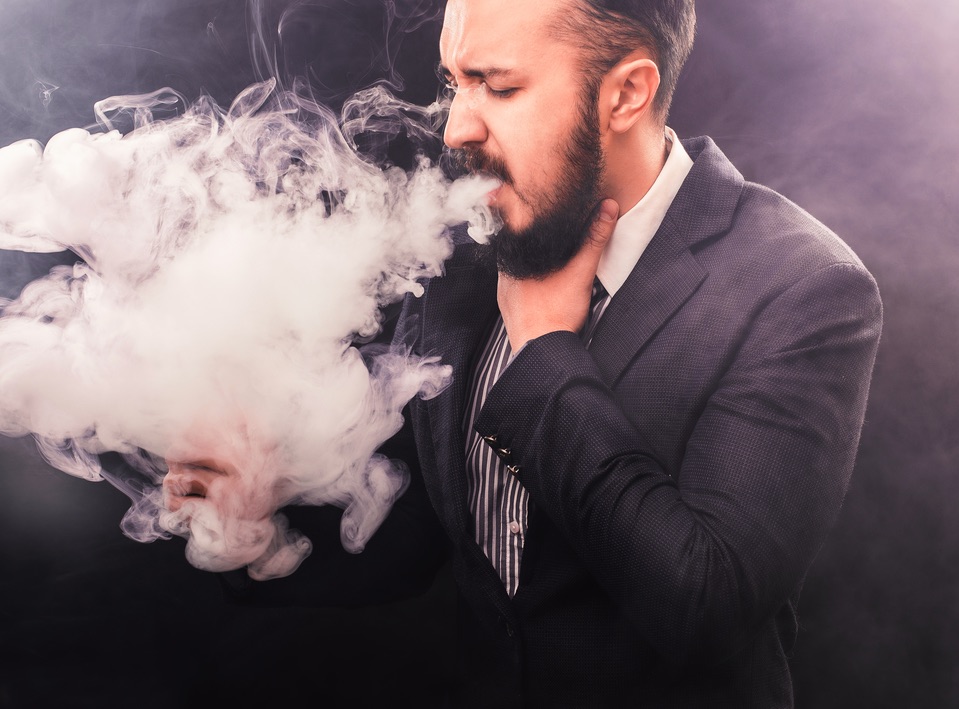 Did you cough when you tried vaping for the first time? That’s more common than you might think. For reasons we’ll shortly explain, coughing and throat irritation are two of the most common symptoms that people experience when they initially switch to vaping. In most cases, the coughing is nothing to worry about, and it’ll go away on its own. If you’re concerned and want to find put how to stop coughing when vaping though, this article is here to help. We’ll explain the five most common reasons for coughing while vaping and describe the steps you can take – if any – to alleviate the problem.

This article is not intended to provide medical advice. If you notice worrying symptoms, call NHS on 111 for help.

The first thing you need to know about vaping is that people almost always cough – or feel like they’re going to cough – when they take their first few puffs. The vapour may contain nicotine, but that doesn’t mean it’s going to feel exactly the same as cigarette smoke. Smoke has a very dry character, and vapour feels wetter in comparison. Very soon after you start vaping, you’ll probably start to find that the vapour feels very soothing to the throat. It might take a day or two, though, before vaping feels completely normal to you. During your transition to vaping, you might find it helpful to use an e-liquid with a bit of menthol in it.

Your Nicotine Strength Needs to Match Your Hardware

One of the biggest and most unfortunate mistakes that you can make as a new vaper is using the wrong e-liquid nicotine strength for your vaping hardware. When you read about how to get started with vaping, you’re usually going to see advice suggesting that you should start out with the highest nicotine strength possible. For most e-liquid brands, the highest available strength is 16-20 mg/ml. Buying the highest possible nicotine strength gets you as close as possible to the nicotine delivery of a tobacco cigarette, which is obviously what you want when you’re trying to quit.

That advice, however, fails to take two factors into consideration.

Some E-Liquids Are Smoother Than Others

Smokers Tend to Cough When They Quit

Before you blame your coughing on the fact that you’re vaping, you should know that coughing is one of the most common symptoms experienced by those who quit smoking. In your lungs, you have tiny hairs called cilia. The cilia are responsible for keeping your lungs clean by clearing out contaminants. Cigarette smoke makes the cilia less efficient, thus allowing tar to accumulate in your lungs more rapidly. When you quit smoking, though, the cilia become more active – and naturally, your lungs are going to want to clear out the tar as quickly as possible. That’s going to cause coughing, and the coughing will sometimes include heavy phlegm.

According to the Mayo Clinic, the increased coughing when you quit smoking can last a few weeks. You should ask your doctor for advice if you cough up blood or if the coughing lasts longer than a month.

You May Have a PG Allergy or Sensitivity

If you’ve exhausted all of the above ideas and are still coughing when you vape, it’s possible that you are allergic or sensitive to propylene glycol. PG allergies and sensitivities are rare, and if you were allergic to PG, there’s a good chance that you would already know because PG is in a huge number of the products you’re likely to use every day. PG is a common ingredient in haircare products, cosmetics, toothpaste, deodorant, air fresheners, medications, shelf-stable foods and more. Nevertheless, there are a few people who don’t discover the fact that they’re sensitive or allergic to PG until after they stop vaping.

If you are allergic to PG, developing a cough from vaping is one possible symptom. Other possible symptoms include itchiness or bumps in or around the mouth. If you experience any of those symptoms, you should consider switching to a vape juice that uses 100-percent vegetable glycerine as a base and no PG-based flavours. If the coughing and other symptoms go away when you make that change, it would probably be wise for you to avoid all e-liquids containing PG.

how to use vape kitsvape cough