X
This site uses cookies to provide and improve your shopping experience. If you want to benefit from this improved service, please opt-in.
More Info
Accept Cookies
BlogVape HardwareVaping In The UK – Who Invented it and When Did it Take Off?
Menu
Vape Hardware

Vaping In The UK – Who Invented it and When Did it Take Off?

No vaporising device that resembled a vaping device existed prior to 1963. Then an American gentleman named H A Gilbert filed his patent for a “smokeless non-tobacco cigarette”. His patent expired in 1982 and the world didn’t notice. It wasn’t until a Chinese pharmacist called Hon Lik made his version in 2003 did vaping make progress and he became known as the person who invented vaping, something which has taken the UK by storm. 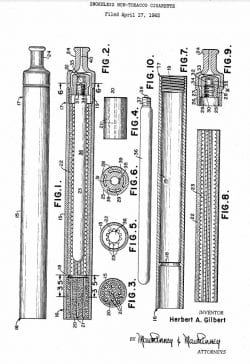 Some wonder why vaping never took off in the 70s and 80s given that Hon Lik’s device was very similar in design to Gilbert’s. In an exclusive interview with James Dunworth, Gilbert speaks about how pharmaceutical and tobacco companies did what they could to maintain their markets. Hon Lik didn’t face such restrictions with access to cheap infrastructure to translate his idea into sales.

The device spawned imitations from entrepreneurs who saw the real opportunity of a product that could be like smoking but removed the harmful elements produced during tobacco combustion.

History of Vaping in the UK

Early adopters in the UK struggled with devices that were shaped like cigarettes and delivered nicotine poorly. Six years later and the world was just beginning to wake up and Jean-François Etter published one of the first studies looking at vaping in 2009. Etter discovered vapers were almost exclusively smokers or ex-smokers, but with next to no research “several respondents were concerned about potential toxicity”. Times have really changed as currently in excess of 200 papers investigating aspects of vaping are published per month.

The absence of large corporations ploughing money into marketing and advertising meant the market was growing through consumer word of mouth. It’s  not clear who invented vaping in the UK. Products were being experimented upon by users as they sought to tweak designs to improve nicotine and flavour delivery.

An indication of how many people were vaping can be seen in the video of the very first UK VapeFest in 2010. A handful of vapers in the backroom of a pub with a couple of the few early businesses to market:

The first major shift began to take place over the next 18 months as people found ECF, an online forum created in 2007. Users exchanged information about the things they had tried in order to make devices work better. Despite being set up as a UK forum, ECF was predominantly used by Americans and other forums were created to feed the UK need. First came UK Vapers and a couple of others before a company complained about a review and threatened legal action in 2012. This led to the formation of what has become the largest online forum in Europe: Planet of the Vapes.

Apart from the standard equipment coming from China, all of the major development work being carried out was conducted by vapers themselves. Some set up lathes in sheds, others were trying different juice recipes in kitchens, and a third group were opening up shops, market stalls or online web stores.

If you transported yourself back to that point in time you would find today’s ubiquitous 510 atomiser/mod connection vying with the 901 and 801 alternatives. People were inventing a whole new language like “cartos”, “throat hits”, and “clearos”. It was an age when the latest version of a mod or atomiser really was an improvement upon the previous iteration and vapers clamoured to buy it – frequently smashing the F5 keyboard button to refresh screens on launch day. China saw this demand and the number of people who could never purchase an original device that had been made by hand in low numbers and made cheap copies in high volumes by stealing the designs. The age of the clones dawned.