X
This site uses cookies to provide and improve your shopping experience. If you want to benefit from this improved service, please opt-in.
More Info
Accept Cookies
BlogRegulationsVaping: Why the UK Trumps America
Menu
Regulations

Vaping: Why the UK Trumps America

There is no doubt that vaping divides opinion. Those who have finally managed to quit smoking by turning to vaping will always back ecigs to the hilt. However, strange as it may seem, some people don’t enjoy the aroma of apple pie wafting past! Others fear that children will be tempted by the lure of tasty eliquid flavours.

Unfortunately for vapers, many lawmakers around the world are vaping sceptics. Particularly those in the United States. 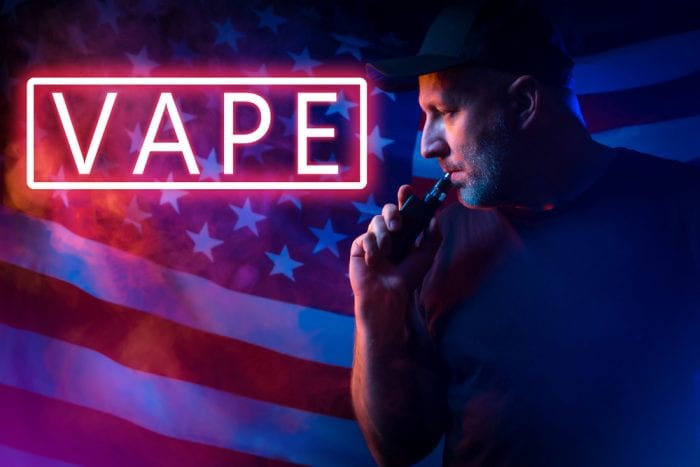 The Most Powerful Man in the World

As the position of Most Powerful Man in the World has recently been up for grabs, we thought we should consider the potential impact of a certain election on vaping. The citizens of the United States have been out in force to visit polling stations (or their local post boxes as it turns out). If vaping divides opinion, it has nothing on the presidential election when it comes to contentious issues!  The acrimony between voters on the red and blue side of the fence was something to behold.

At the time of writing, Mr. Trump is refusing to acknowledge defeat in an election he has clearly lost. Only in America!

We are sure that in the midst of a global pandemic and potential economic collapse, vaping is unlikely to be a priority for any administration.

In the UK, vaping is largely accepted and even encouraged. The only serious restrictions we are forced to endure are those imposed by the EU. Those restrictions might be short-lived anyway due to Brexit.

At least the rules and regulations regarding vaping are consistent across this country. We know what we can and can’t do, whether we are in London or Lancaster.

The situation is very different in the U.S. and is, to say the least, extremely confusing. That’s because most vaping laws are established by the legislatures of the individual States and cities rather than at Federal level. Predictably, every State and even some cities have different vaping laws and some of them are draconian.

Far be it from us to show political bias. But perhaps the inauguration of Joe Bidon will eventually lead to a common sense and unified approach to vaping-related issues in America.

Was that a pig we saw flying past?

It has to be said that the vaping laws in many U.S. States are more than a little curious, especially considering that America is allegedly the land of the free. It turns out that it is the land of the free for gun enthusiasts but not for fans of menthol eliquids.

In California, vaping is banned “within 20 feet of a main exit, entrance, or operable window of a public building”. However, it is perfectly OK to stand within 20ft of said building with a loaded semi-automatic pistol in your pocket, as long as you have a concealed carry permit. In what universe could a vape pen be more dangerous than a Glock 19?

Vapers in San Francisco face even greater challenges. The city recently became the first region in the U.S. to ban the sale of electronic cigarettes and eliquids containing nicotine. It is also now illegal to deliver vaping equipment and eliquids to San Francisco addresses, so vapers can’t even order online.

The new laws were passed due to fears over the number of young people taking up vaping. But it remains legal to sell tobacco cigarettes, cannabis and products for vaping cannabis! Go figure!

In Kentucky, the use of electronic cigarettes is prohibited at “body piercing and tattooing workstations” amongst other places. In Maine, vaping is banned at or near “beaches, state parks, and historic sites”. What a bummer for tourists!

The vaping laws in Nevada are ludicrous. Vaping is banned in all indoor public places apart from, you’ve guessed it – casinos! Vaping is treated as hazardous to America’s youth but it is clearly OK to encourage an addiction to gambling that leads to financial ruin. Vaping is also prohibited in any “invasive body decoration establishment”. So, you cannot vape in Nevada while having your nipples pierced. Outrageous!

The differing and ever-changing Covid-19 rules in the UK have caused a considerable amount of confusion. However, the restrictions introduced to control the pandemic are as clear as mud in comparison to the vaping laws across the pond. If you are a vaper and plan to visit the U.S., it is vital to check the rules in each and every jurisdiction that you will travel through. That RV trip across the Wild West could be wilder than you thought!

For a taste of the madness, search the streets of San Francisco for a vape shop and you won’t find one. Then visit the Bass Pro shop where you will discover all things designed to aid your enjoyment of the great outdoors. Alongside an impressive selection of walking boots, fishing rods and quad bikes, you will eventually stumble across an inconceivably enormous array of firearms and ammunition. All of which you could buy right there and then, were you a U.S. Citizen.

After admiring the armoury at Bass Pro, proceed to the nearby Six Flags theme park and take a puff of your Heisenberg. A member of staff will appear seconds after you have put your vape to your mouth and behave as if you have brandished a shot gun.

The bottom line is that across America, legislatures are progressively restricting vaping while not banning smoking. In addition, no lawmakers dare interfere with the gun laws, leaving people in some areas free to purchase an AK47 but not one of those terribly dangerous electronic cigarette thingies.

Joe Biden has promised to unify the country and to address climate change. Perhaps he should take a long, hard look at vaping too. Many Americans are still dying of smoking related illnesses every day. Thousands are being shot dead.

Vaping won’t prevent mass shootings. Unless there are a few nutters out there who could be prevented from spraying bullets around by easing their nicotine cravings! If saving lives is the priority, American vaping laws simply don’t make any sense.

More research into the health implications of vaping is required, of course it is. Naturally, children should be protected from taking up vaping. But surely adults should be free to vape. At the very least, the vaping laws should be consistent across the country so that unsuspecting visitors don’t get treated like homicidal maniacs.