Making the switch to vaping is a major decision. It can be helpful to have an idea of what it’s going to be like before you begin. In this article, we’re going to walk you through the switch from smoking to vaping by explaining what you can expect and providing some tips to ensure that your switch will be successful.

What’s the Best Type of E-Cigarette for a Beginner?

The two types of e-cigarettes that are best for beginning vapers are cigalikes and pod systems. Those are the vaping devices that are most popular among beginners because they’re small, easy to use and very reminiscent of tobacco cigarettes. They’re also designed to produce a very satisfying vaping experience with the mouth-to-lung inhaling pattern that most smokers prefer. You can read a more detailed comparison of cigalikes vs. pod systems elsewhere on this site. In that article, we explain what both types of devices are and describe their pros and cons. The short answer, though, is that you should strongly consider buying a cigalike if you think having an e-cigarette that looks and feels like a real cigarette in the hand and the mouth is going to be important to you. If it’s more important that you own a device with a wide selection of flavours and very efficient nicotine delivery, you should consider buying a pod system.

Before you start vaping, it’s important for you to understand up front that an e-cigarette can never taste like a real cigarette. The flavour of a cigarette comes from burning plant matter. E-liquid makers use food-grade flavours to create their products, and while they’ve come up with an incredible variety of flavour profiles, no combination of food flavours will ever result in a flavour profile that tastes like tobacco smoke. So, why do so many people vape if vaping doesn’t taste anything like smoking? It’s because people who switch to vaping usually end up realising that they never liked the flavour of cigarettes that much in the first place. A cigarette can never taste like anything but a cigarette, but there are literally thousands of different e-liquid flavour profiles on the market today – and more are being invented all the time. The real magic of vaping comes from the realisation that you can have your nicotine without the harshness of smoke. Once your sense of taste resets itself and you realise how truly awful cigarette smoke tastes, you’ll never crave a cigarette again.

Once you’ve fully transitioned from smoking to vaping, you’re going to find that vaping feels very much like smoking in terms of the throat hit and the way the nicotine hits your system. Nicotine is essentially the same whether it comes in the form of tobacco leaves or a tobacco extract, which is what’s used to make most e-liquid. Once your body has become accustomed to getting its nicotine in vapour form, you’re going to feel like nothing has changed at all. Of course, something has changed; you’re still getting nicotine, but you’re not getting the thousands of other chemicals that cigarette smoke contains. So, before you can get to the point where vaping feels the same to you as smoking once did, you’re going to have to adjust to the absence of those chemicals. 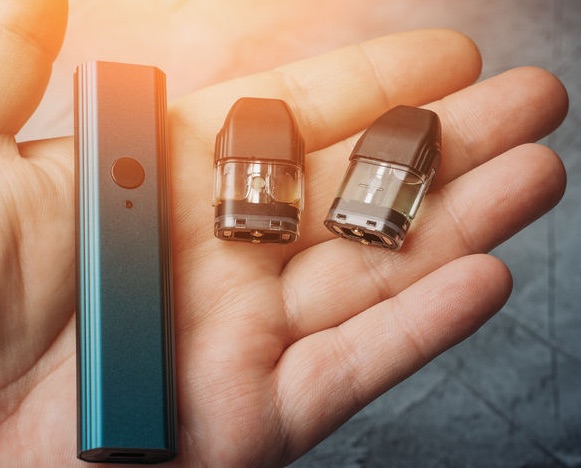 For the first few days after you stop smoking and start vaping, you’re probably going to find that you don’t feel entirely right. You might feel a little cranky and irritable, but it will pass – and it’ll pass much more quickly than it would if you used any other form of nicotine replacement. That’s because vaping – inhaling your nicotine rather than getting it in the form of an oral product like gum – gets the nicotine into your system much more quickly and is infinitely more satisfying. It’s also worth noting that coughing – sometimes with thick phlegm – is a common symptom among those who have just quit smoking. Like the crankiness, it’ll fade after a few days. If you notice any symptoms that concern you, talk to your doctor. In the meantime, when you begin to feel irritable, think about the positive changes that you’ll experience once you’re fully accustomed to getting your nicotine in a different way. People invariably report feeling healthier and more energetic once they’ve switched fully from smoking to vaping. You’ll also smell better and will have better self-esteem. You’ll no longer wake up in the morning with aching lungs as you struggle to choke down the first cigarette of the day. Don’t forget all of the extra money you’ll have in your pocket. Switching to vaping will change your life in ways you can’t even begin to realise yet. Before you can experience the full extent of those changes, though, you’ve got to switch fully to vaping – and that means quitting smoking. Our advice for completing that step successfully is actually surprisingly simple.

How to Make Your Switch to Vaping Successful

In case you haven’t surmised it from reading what we’ve said so far, vaping might make it easier to quit smoking, but nothing can make quitting easy. When you start vaping, you’re not just going to automatically stop wanting cigarettes. Therefore, the best way to switch to vaping successfully is to make the commitment that you’re going to stop smoking immediately upon receiving your first e-cigarette. With an e-cigarette, you’re still getting your nicotine, and you’re getting it in the only form that approaches the satisfaction level of tobacco. Make the commitment that, no matter what, you’re going to make vaping work for you.

Many people continue smoking after they get their first e-cigarettes, reasoning that once they start vaping, they’ll naturally taper off on smoking until they no longer use tobacco at all. Vaping does make it easy to cut down on smoking, but you’ll find that taking the final step and becoming tobacco free is quite difficult if you vape and smoke concurrently. If you commit to quitting as soon as you get your first e-cigarette, on the other hand, you’ll find the transition much less difficult because, though you may feel a bit irritable for the first few days, you’ll at least be able to content yourself by playing with a new gadget and trying different e-liquid flavours. By the time the novelty wears off, you’ll realise that you feel completely normal – and your switch will be complete. If you struggle and have a Local Stop Smoking Service, that supports vaping, available, you might be able to get moral support and personalised advice from them.