On the face of it, disposable vape pens are great innovations that help smokers transition to vaping hassle-free.

There’s no doubt that such convenient and readily available devices offer many benefits. They are snazzy, colourful pieces of kit that are so simple to use that a 3-year old could operate one straight out of the packet.

But that is a bit of a problem isn’t it? And being highly accessible to youngsters isn’t the only issue with disposable e cigs. 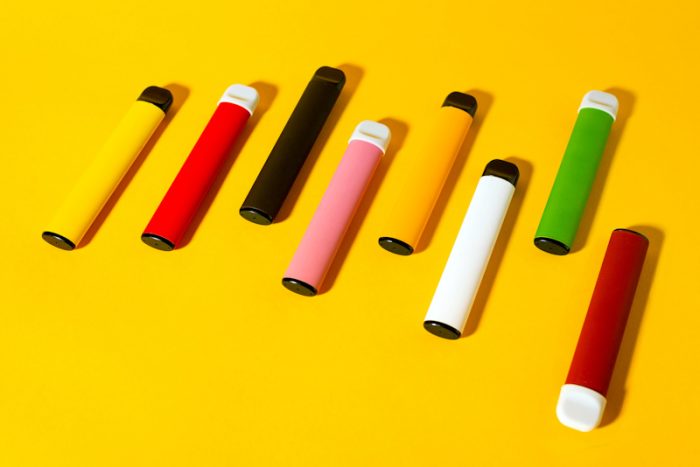 Before we look at the many serious downsides of disposable vapes, we should explore why millions of these curious little sticks are being sold every day.

Like sweeties on a pick ‘n’ mix display, disposable devices tend to boast funky, colourful looks. They are hard to ignore, and they are available in a wide variety of outlets including grocery stores and petrol stations. They appear to be cheap, and they are certainly easy to use.

The complexities of some vaping equipment can be off-putting to beginners and many vapers don’t relish the thought of having to top with juice or replace their atomiser heads. Disposable pens are generally inhale activated which means there are no controls or technicalities to worry about. The devices are preloaded with e liquid and when that is gone or the battery is exhausted, the user simply discards the pen and starts vaping with another. Disposables are incredibly compact which means they are highly portable and easy to conceal.

With size, ease of use, availability and simplicity on their side, disposable vape pens are the convenient choice, but that convenience can come at a cost.

Convenience is an attractive proposition in the modern world. We have become accustomed to immediacy to the extent that a nano second’s delay in getting what we want seems so yesterday.

We have a world of information at our fingertips wherever we happen to be. We can order just about anything on our mobile phones and Amazon can deliver that order in as little as 14 minutes. Why drive to the takeaway when you can have exactly what you fancy delivered to your door? Why cook a meal when you can microwave a pre-prepared one in minutes?

If you want to make a fortune, start a company that panders to the need of consumers for speed and convenience.

A few years ago, it would have been inconceivable that delivering food on behalf takeaways could make you billions. But today, Deliveroo is worth 7.6 billion. Estimates vary as to the market value of ready meals but our spend on these convenience foods in the UK almost certainly exceeds £4 billion each year. One by one, we are eliminating all chores and delays from our lives.

Unfortunately, disposable pens are the vaping equivalent of ready meals but with a few MacDonald’s burgers and a Deliveroo order thrown in for good measure.

There can be few people in the western world who are not aware of the issues caused by single use plastics. We are on the verge of an environmental catastrophe thanks to the inconceivably large mountain of plastic that ends up in landfill, the oceans and even our hedgerows, every day.

While we all throw up our arms up in horror when a whale’s stomach is found to be loaded with plastics, how many of us stop to think about how we can reduce plastic waste? Those who invest in disposable vape pens are clearly not giving this problem any thought at all. Disposable e cigs are the epitome of pointless plastic use and most of them will end up polluting the planet. Their packaging also contributes to the enormous volume of waste that they create.

To make matters worse, every disposable vape pen contains a battery. All batteries, including Lithium-ion batteries, should be disposed of carefully. They can cause landfill fires that smoulder for years and release toxic chemicals into the air. These impact our breathing and accelerate global warming. The process of extracting lithium to use in batteries also damages the environment, as does the manufacturing process.

It is likely that most vapers who have chosen disposable vape pens just throw their used ones in the bin without a second thought. How many vapers dispose of their devices responsibly or consider the repercussions of not doing so?

It won’t be long before there are entire pods of dead whales that have expired principally because their intestinal tracts are blocked by discarded vape pens.

Disposable vape pens are everywhere and so its is all too easy for kids to get hold of them. In the United States, Juul e cigs have been blamed for causing a teen vaping epidemic. The sleek disposables were heavily marketed using young models and the message was clear – Juul devices are cool. Before Juul products were launched, just 1% of American teenagers were vaping. In a short space of time, that figure became 21%. A huge proportion of American teens became addicted to nicotine, having never smoked a traditional ciagarette.

Juul disposables sparked a serious backlash that has resulted in many States instituting restrictions on vaping and, in the case of San Francisco, even a complete ban. This situation has disturbing implications for smokers who are trying to quit their habits. It would be troublesome, to say the least, if disposable devices led to a vaping epidemic amongst under eighteens in the UK. Despite age restrictions on their sale, youngsters do get hold of e cigs from unscrupulous retailers, by stealing them or buy asking someone of age to buy them.

There are many reasons why vaping helps smokers to quit. One of these is certainly the fact that electronic cigarettes give quitters their nicotine fixes. E liquids are available in a variety of nicotine strengths and this enables reformed smokers to choose an appropriate strength for their needs and then gradually reduce this over time.

Sadly, disposable devices offer limited choices, with many being available in just one nicotine strength and that can be as high as 20mg. A nicotine strength of 20mg is far too high for many recently reformed smokers and certainly to high for those who have long since stopped smoking. As the nicotine concerned is often of the salt variety, it is absorbed more quickly than the freebase nicotine found in tobacco cigarettes and so its effects are more immediate. For this reason, disposable e cigs are potentially highly addictive. That isn’t a major issue if disposables are being used in place of traditional cigarettes. But it most definitely is a problem if children and young adults are vaping when they have never been smokers.

Funky, colourful disposables look appealing and seem to be cheap options. You can buy a disposable loaded with 1.3ml of e liquid for less than £3. However, a low cost disposable will deliver only around 300 puffs. For many vapers, that is sufficient for just one day. On the other hand, a rechargeable, refillable vape pen or pod system can be purchased for around £20 and 10ml bottles of e liquid for as little as 99p. The rechargeable, refillable devices boast lifespans of around 6 months. Their coils will need to be replaced fortnightly, on average. That means that 300 puffs on a standard e cig could cost just 60p.

The precise cost of vaping with a reusable e cig varies according to the nature of the device and the e liquid chosen. But there are few, if any, set-ups that would result in a single day’s vaping costing £3 or more.

There is no doubt that disposable devices cannot deliver well on flavour, mouth to lung airflow or smoothness. Rechargeable, refillable e cigarettes are superior in every way. Many beginners are intimidated by vaping jargon and mistakenly believe that most vaping hardware is complex and difficult to use. This is not the case.

An entry level vape pen or pod system offers the minimal intellectual challenge of learning to press the only button on the device. These e cigs may have no settings at all for vapers to deal with and can be refilled with e liquid in less than 10 seconds. Replacing a coil (atomiser head) will take around 30 seconds and with vaping technology having improved greatly, some coils will last up to four weeks.

Even a compact vape pen, pod system or starter kit may boast a significantly larger battery than any disposable. Batteries can be recharged quickly courtesy of Type-C charging while passthrough technology enables users to recharge while vaping.

Disposable vape pens are marketed as hassle-free solutions but will save their users from just one minute per day of what could vaguely be described as hassle.

There’s a wonderful array of e liquid flavours to choose from but not for users of disposables. Those poor souls are restricted to a what is usually a small vaping menu featuring unimaginative flavours. With refillable e cigs, vapers are restricted only by the need to select juices with appropriate bases for their atomiser heads. High PG, high VG and 50/50 e liquids are all available in thousands of flavours. Better still, vapers can mix their own e liquids, giving themselves infinite choices and even lower prices.

As disposable devices have exploded in popularity, it is inevitable that fakes are now common. These can be indistinguishable from the genuine article until you try to use them. Unfortunately, counterfeit devices will deliver even worse performance than the real things and could be very dangerous. Even genuine devices have been withdrawn from sale due to faults and safety concerns.

The sad truth is that disposable vape pens having nothing at all to recommend them, apart from colourful casings and ready availability. They deliver a poor vaping experience, they are expensive and they restrict vapers’ choices. Disposables are disastrous for the environment and are no easier to use than many alternatives which are equally hassle-free.

The human race is rather fond of convenience and so anything that appears to be a quick and easy solution always proves popular. But as with junk food and ready meals, convenience comes at a cost and that convenience can be nothing more than illusion anyway. If eating habits are anything to go by, people will continue to buy disposable vape pens to save themselves that precious one minute per day.